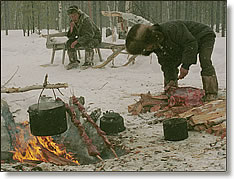 Ethnoarchaeological research in the Baikal Region

The goal of this module is to study the manner in which material markers of both actually-existing and historically-documented subsistence patterns can be linked to ecological action. The use of ethnographic information in archaeological interpretations has considerable potential, but also raises some analytical challenges. In particular, the nature of ethnographic fieldwork often means that insights are local in scale and of short temporal duration, whereas archaeologists generally investigate the dynamics in regional adaptations and long-term processes of culture change27. The research of the Ethnoarchaeology Module is designed to surmount these analytical challenges, and will integrate historical and ethnographic research in order to develop detailed models of adaptation and culture change at social, spatial and temporal scales appropriate for tackling the core archaeological research questions of this project. This information can then be used to model patterns of boreal hunter-gatherer land use, which, in turn, can be used to guide the interpretation of materials recovered in the context of other modules. The research of this module will be organized within three teams, each of which will address specific goals. Much of the proposed work will build upon pilot studies conducted during the first MCRI.

1. The ethnographic team will use traditional techniques of participant observation with local aboriginal hunters and reindeer herders to demonstrate how subsistence and social action are integrated with a regular use of space. The two proposed research sites are homes to Evenki and Yakut hunting and pastoral groups who intensively use the forest for subsistence. Several bridging arguments can be used to link the Archaeological and Ethnoarchaeological Modules of BAP. Although it would be both unreasonable and improper to assert a direct, genetic connection between present-day Evenki and Yakut residents and the region’s prehistoric populations, it is clear that both groups made their homes in similar ecological settings and procured the same species for subsistence. These direct parallels enable us to productively explore general behavioural analogies between present and Middle Holocene adaptive strategies in relation to the similar sets of environmental opportunities and constraints. At another level, it is also clear, that in practicing these subsistence adaptations, contemporary communities create social relations and actively express symbolic perceptions of aquatic, terrestrial and cultural resources located within human landscapes79, often expressing these concepts via the creation and discard of material culture45. Observing and understanding the material articulation of these processes in the present equips us with a series of models for exploring archaeological evidence for potentially similar cultural activities.

Our aim here is also to move beyond the individualistic and optimizing models of human subsistence behaviour18,19,94,114 and to develop a resolutely social and symbolic perspective on ecological adaptations. We will also document observed activity area use that arises from collective action within households or across seasonal activities3,44,45,52,76,93.

Preliminary ethnographic research at both sites was conducted in 2004 and 20055 and is the focus of two current doctoral dissertations1,22. Our method consists of long-term participant observation with small hunting and herding groups both in the spring and autumn. More specifically, we plan two ethnographic expeditions in a lake-dominated and a river-dominated region in 2006 and 2007. We then plan a joint expedition with the household archaeology team in the summer of 2008. We already have agreements in place with the hunters and brigadiers in charge of each hunting area. The expeditions will consist of one or two people living and traveling with local families for a minimum of two months.

2. The household archaeology team will build upon the interpretation of cultural processes developed by the ethnographic team to design a robust methodology for modeling historic and recently abandoned habitation sites. These shallow excavations will strive to record fine details of material deposition and land use. Techniques pioneered in the Canadian Arctic, Subarctic, and Prairies, will be adopted to develop holistic pictures of symbolically significant zones within dwellings connected with hearths, general activity areas, and sleeping areas. These methods will include three-dimensional modeling of material remains28 and the alternate analysis of varying scales of material deposition76. The household archaeological team will concentrate upon Evenki and Yakut habitation loci built in the autumn and spring – the times that these people are thought to be engaged in a similar form of subsistence to the prehistoric cultures framing the project. Fieldwork will be undertaken in the Vitim river basin of Trans-Baikal at four different sites.

3. The ethnohistorical team will conduct the analysis of rare and unique archival records held in Russian regional archives, many of which were discovered during our first MCRI5,86. Among others, we plan to examine the archival records of the Yakut Expedition 1895–1897. These records are exclusively held in the Irkutsk Regional Archive, and are only partially published in Russian and poorly known in English. The goals of the Yakut Expedition were to study the continuity of aboriginal tradition in the 19th century. The expedition carried out an intensive description of Evenki and Yakut communities in what is today the southern part of the Yakut/Sakha Republic and the northern part of Irkutsk Oblast'. This work involved ethnographic description, mapping of land-use, and photographing of habitation and ritual sites. It is important to emphasize that this approach will expand the time-depth of the ethnoarchaeological studies27 thus, making them even more relevant to the goals of this broader project. The region of the archival research overlaps with that of the other two teams. Preliminary archival surveys of the collection were carried out in 1998 and 2002. This team will be led by Anna Sirina, who is an internationally renowned ethnohistorian of the region33,93. Furthermore, this particular study will be supported to a large extent by grants from British and Norwegian funding councils.

Our module will also continue the digitisation and analysis of the Soviet Polar Census of 1926 – an internationally unique source that gives a detailed picture of aboriginal land use and economy at the level of the individual, the household, and the community.The ethnographic, ethnohistoric, and household ethnoarchaeological data will greatly enrich our understanding of contemporary, historical, and prehistoric hunter-gatherer cultures in the region. Thus, this work will contribute directly to the specific research goals of the other modules. The methods employed in this module are aimed to improve the understanding of symbolic factors in the interpretation of material remains, historic and prehistoric.

22. Brandisauskas, D. An Ethnography of the Upper Vitim Orochen-Evenkis. Doctoral Dissertation in preparation. Department of Anthropology, University of Aberdeen.

28. Dawson, P. 1995. Unsympathetic users: an ethnoarchaeological examination of Inuit responses to the changing nature of the built environment. Arctic 28(2): 71–80.

52. Kent, S. 1984. Analyzing activity areas: an ethnoarchaeological study of the use of space. Albuquerque: University of New Mexico Press. 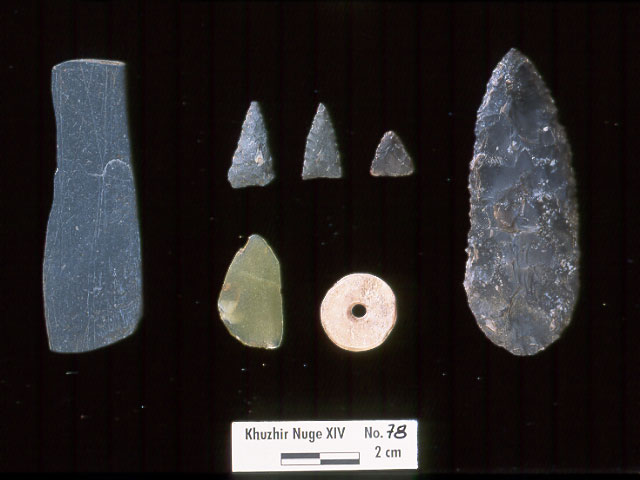